On the first day, a presentation and discussion of the program and schedule followed a welcome and comments from Dirk Kratz, the project’s leader. To facilitate the introduction of new participants, a “Speed Dating” was held. Then came Thomas Legl’s Keynote Address, “Aftercare – Special needs to promote long-term stability for clients who use NPS.” The following day, participants’ work and presentations were guided by four focal points/questions and in the afternoon, there was a guided tour of Reichenau Castle and its present exhibition. The mayor of Reichenau received the group.

Individual short presentations from each project member organisation describing their “Aftercare Experiences” were held on the morning of Day 2, Tuesday, September 21st. Q1: Are there any therapeutic features that contribute to the development of trust? Q2: Is there any way to mitigate the consequences of an undiscovered relapse? How does the phase of aftercare conclude? Q4: Should a concerted effort be made to ensure continuity?

On a board, the essential points of each presentation were arranged. The effect and lessons learned from the lectures were reviewed in a round table setting. Fernando Mendes mediated it, and the conversation revealed that most facilities concentrated on the first two topics, leaving the final two to the open discussion.

The outcomes include the following:

Q3: In general: difficult to draw a line. However, in case of all time relapse, lack of respect/motivation, addicted to the facility, extreme violence, border of competence, unreliability, breaking the rules, dangerous or harmful influence on others, distributing drugs, lack of trust.

Q4: new rules, restart from the previous step and the program, renew the care plan, individual decisions of the own process, no exclusions. However, if the client has repeated unacceptable behaviour with severe psychiatric problems, then the aftercare has to be stopped, or the client has to be blocklisted for a limited period. Nevertheless, it should be possible to get back in treatment, for example, with a motivational letter and be open to other options.

After lunch, the “Therapiesalon im Wald”

was visited and the LTTA members were separated into groups according to their fitness level, so they could hike to the “Speckbacherhütte” for dinner. The focus of Day 3: Wednesday, September 22nd, was on the working groups. NPS Survey, Case Studies, and Staff Experience Questionnaire. Each group wrote a report on their “current work.” The panel deliberated on the findings.

Day 4: On Thursday, September 23rd, the LTTA welcomed a client from “Therapisalon im Wald.” Thomas Legl interviewed the client regarding NPS and his post-treatment experiences. He did not frequently utilise NPS due to the unknown hazards. It’s a cost-effective choice if you’re unable to obtain or have access to other medications. The client discussed his treatment plan’s nature therapy and activities, and his early experiences with adventure maximising and dangerous behaviour. This, however, changed with treatment. He developed mindfulness, security, and a sense of humour. Nature, sports, and meditation provide him with challenges and substitute for narcotics. Following the enlightening conversation, everyone had the opportunity to ask questions.

Maria Rosario Mendes then presented a brief overview of the upcoming Madeira meeting. Dirk Kratz, the project’s leader, discussed the TPM Meeting, its conclusions, and its outlook. After that, they were divided into groups for adventure therapy. The four groups included mountain bike excursions, hiking, and open water kayaking. All participants gathered at the historic Looshaus for a final social supper at the hosts Therapiesalon im Wald’s invitation. The hosts and project leader emphasised the tremendous changes, sophisticated team building, and successful outcomes. 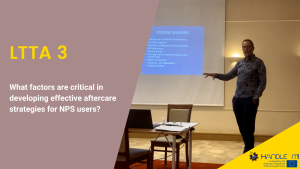 What factors are critical in developing effective aftercare strategies for NPS users?

Dr. Thomas Legl from “Therapiesalon im Wald” discusses residential treatment processes in addict aftercare, the differences to be considered with regard to NPS users, and how the covid pandemic effects aftercare. His presentation serves as the foundation for later working groups, in which it was determined how to improve aftercare for NPS users. 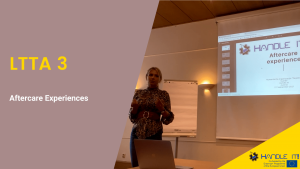 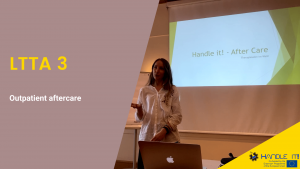 Laura Vatrtrova works at the partner organization “Therapiesalon im Wald” and shows what is required for a successful aftercare procedure as well as the qualities required by experts for effective aftercare.

You can find out more about which cookies we are using or switch them off in settings.

This website uses cookies so that we can provide you with the best user experience possible. Cookie information is stored in your browser and performs functions such as recognising you when you return to our website and helping our team to understand which sections of the website you find most interesting and useful.

Strictly Necessary Cookie should be enabled at all times so that we can save your preferences for cookie settings.

If you disable this cookie, we will not be able to save your preferences. This means that every time you visit this website you will need to enable or disable cookies again.